If it’s not in Fewzion it doesn’t happen… 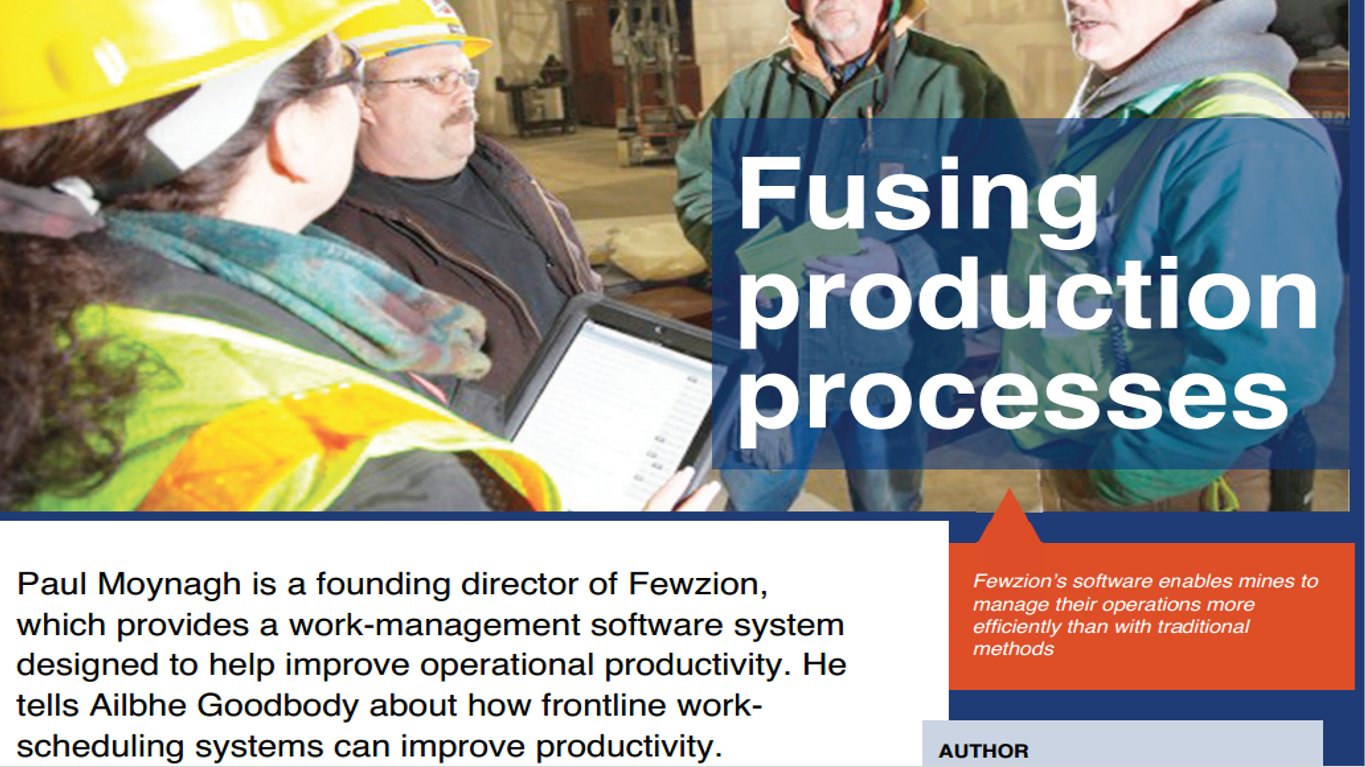 This was great to hear from a site we installed Fewzion on about six months ago. While I was driving through Middlemount early last week I spoke to a friend on the site and he told me that they were celebrating a production record for the previous week of over 300,000 tonnes of coal to the ROM. Pretty impressive for a site I helped install a traditional spreadsheet and whiteboard MOS on about four years ago. The traditional MOS didn’t stick. Fewzion has…

When he say’s “IT” in the (if IT isn’t in Fewzion IT doesn’t happen) he means everything, production, maintenance, project and safety/training work. Do you have a system that get everyone on the same page, working together to deliver results like this?

Check out the article below from Mining Magazine for a run down on Fewzion or visit our web site at www.fewzion.com.

Paul Moynagh is a founding director of Fewzion, which provides a work-management software system designed to help improve operational productivity. He tells Ailbhe Goodbody about how frontline work-scheduling systems can improve productivity.

How can a work-scheduling software system such as Fewzion help mining companies to improve productivity, safety and control cost, and what are their advantages over just using spreadsheets?

Most mines have good tools for planning the mine and what is supposed to happen in the next 4-16 weeks (the theory). They also have a lot of data about what’s happening in the mine, with SCADA and fleet-management systems that can tell leaders about the performance of machines, where a machine is and even what it is doing (the reality).

At Fewzion we believe that to improve performance you need to manage the frontline shift-by-shift work process that connects the theory to the practice. To do this you need to know what the targets, tasks, people and equipment are for each specific shift, because results are delivered by these people and equipment each shift. Fewzion is the bridge between the theory and the practice for all work; it is designed to help manage the work done by everyone on-site (from preparation to production and maintenance through to the plant) all in one resource-balanced plan. We don’t know of any other system that does that job.

The key difference is that Fewzion supports the whole ‘plan, do, check, adapt’ cycle from weeks down to shifts. So there are screens and reports for planning the week, adapting plans for change each day, doing shift handovers and pre starts, managing a shift, entering actuals, closing off tasks and reviewing performance in daily review meetings. The group of spreadsheets, macros, whiteboards etc. required to do this outside of a proper software tool like Fewzion is frightening and it’s kind of amazing that many billion-dollar operations still run this way.

While we make life easier for planners by bringing in data from other planning systems (e.g. Excel and SAP), our focus is on getting a good plan in the hand of the supervisor who is out there every day with their crew making the work happen.

With spreadsheets and whiteboards, people often put lists of tasks together for what to do each day. Within Fewzion, each of those tasks has a need gfor people and equipment, so by visually comparing the roster and equipment schedules it is quickly evident if there is enough people and equipment to do the work each shift. This helps ensure everyone is kept productive each shift and reduces clashes for equipment and skilled people.

Fewzion helps the supervisor engage their crew so that they can give feedback about what is and isn’t working. This means planners can create better plans that crews believe can be delivered, not (as I’ve seen many times) say “this is rubbish” then go and do something else. Having an easy-to-use tool insupervisors’ hands means that people can make better decisions, and it’s not just a top-down push – it’s top down and bottom up, and that makes the difference, I think.

How do you encourage employees to use such a system properly?

Everybody says that ease of use is the key (particularly in mining). We have taken this to the extreme, and made the system ‘iPad simple’, which means that there’s very little barrier to use. We find that in many cases people use it better than a pen and paper, or a whiteboard. Where you’ve got literacy issues or language barriers, there can be a lot of push back on manual, paper-based tools. The barrier to use needs to be very low, that’s what I think the difference is for supervisors while maintaining a powerful work-scheduling system for planners and engineers.

We are also careful with our language and don’t like to talk about ‘accountability’. Instead we say that “Fewzion makes everyone’s hard work visible”. So putting a tool like Fewzion into a mine supervisor’s hands helps them to not only influence their crew to get the work done but also helps influence the management team to better plan and co-ordinate the work.

When you put it in those terms, the buy-in is much stronger. Plus, to be honest, despite the cold hard fact that it is about improving performance, Fewzion also feels like a bit of a ‘bright shiny new thing’, so there are always people who are keen to give it a go.

Due to the global mining downturn, many mining companies are cutting back on expenditure. How do you persuade them to invest in a scheduling system at such a time?   Fundamentally, we’re about improving the bottom line by managing processes better.  A lot of the big cuts have already happened, so now companies are looking at how to operate their slimmed-down mines more efficiently – this means driving up productivity and driving down   cost per tonne.

Getting on top of the process and what’s happening every day is one of the most powerful ways to do that, and a scheduling system means you can actually manage that work, which makes it much more likely that you’ll succeed.

Fewzion is being used at Anglo American’s Moranbah North mine in Australia’s Bowen Basin (winner of 2013 Australian coal mine of the year for a complete turnaround in performance). Anglo American has stated on its online investor page that in 2013 it improved longwall output at the mine by 39%. Their longwall now regularly runs at over 100 hours per week.

You certainly can’t attribute all of that to Fewzion – but you can attribute it to managing people, equipment and processes better, and Fewzion is a tool they use for that.

Mark Cutifani, CEO of Anglo American, regularly says he wants to bring manufacturing discipline to the mining industry. Moranbah North has set a high standard for this and the approach is being spread throughout the underground coal business.   We intend to work with other mining verticals, and there is really no reason why Fewzion shouldn’t be used in open-pit mines or hard-rock underground mines right now.

How is Fewzion working with consultancies?

We really enjoy working and collaborating with consultants and have built some strong relationships already. We understand that many of the benefits of Fewzion come when it is combined with effective consulting. That’s not to say that you can’t get benefits from the software on its own (many of our customers have), but together there is a force-multiplier effect.

Our focus is purely on building and supporting great software that people want to use. We don’t provide any competing consulting services so that we can work cleanly with consultants anywhere in the world, and geography is not an issue because Fewzion can be run from the cloud.

There are four elements that work together to improve the performance of an operation: the management system, tools, behaviours (the process of planning, doing, reviewing and improving) and leadership. Most consultants will work on all four of these elements during a project; however, the tools and systems are normally built up with spreadsheets, paper and whiteboards, which are often created from scratch during the project. At the start of a consulting project there’s a lot of effort and investment required to get people to use those tools.

With a modern web-based system like Fewzion, you can have the system up and running in a couple of days. People accept the system quickly because it saves them time, so the consultants can concentrate their effort on coaching for management behaviours, leadership and results.